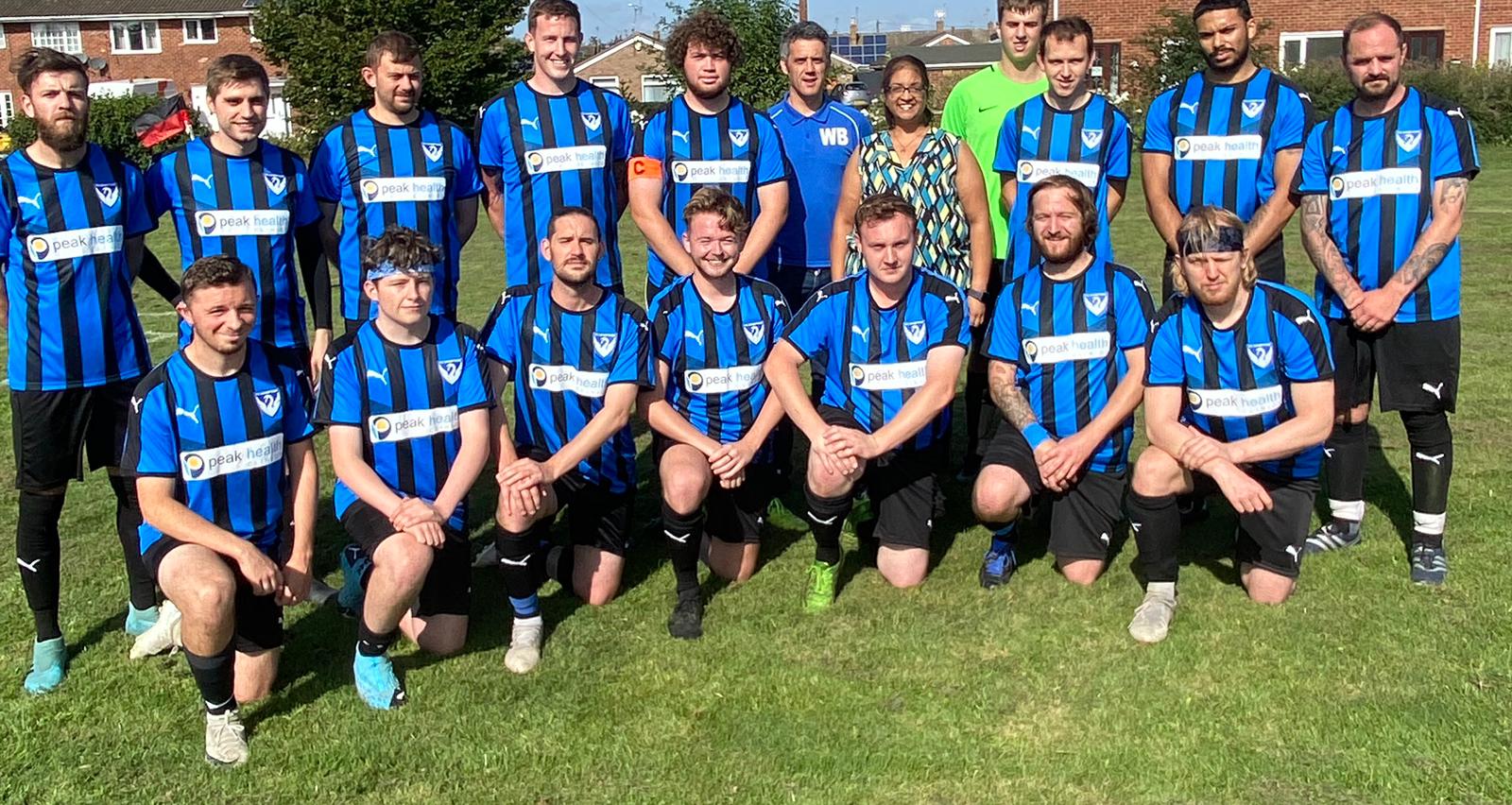 After suffering a heavy defeat the week previously, FC Hampton faced another tough fixture against Sutton Bridge who occupied joint top position in the league.

A few new members joined the squad this week and made an immediate impact.The wet autumnal weather made conditions ideal for a fast flowing match. FC Hampton took the lead on 17 minutes with a Goal from debutant Jay McCracken. Fellow debutant Cain Roberts providing a through ball that was calmly dispatched by McCracken from the edge of the box past the helpless opposition goalkeeper.
The early goal boosted Hamptons confidence and with a defence of Greg Mayho Ollie Fox Kaylum Chater Leon Limbrick snuffing out any threat on the goal of Josh Ratcliffe. The football in the first half was dynamic and intricate, Skipper Aaron Goldstraw working tirelessly in midfield to provide opportunities for wide men Ryan Stephens and Alex Bryce. On the Half hour mark saw Hampton score a well worked second goal. Roberts again picking up the ball in front of the oppositions defence and laying the ball into McCracken who spotted the run of Bryce coming in from the left flank, with one touch to control the ball was struck powerfully past the motionless keeper into the bottom corner of the net.
As the minutes ticked towards half time Sutton Bridge created some menace going forward. Good solid defence work and great handling by the Hampton goalkeeper kept the threat under control.

Early second half Sutton put themselves back in the match with a quick goal. Sustained pressure from the visitors saw several half chances created before, as luck would have it, an attempted cross sliced off the wingers foot and ended up in the Hampton net! Game on at 2-2.

Hampton came back into the game with defender Fox taking the challenge to Sutton with mazy runs trying to create space behind the lines. Matt Lacey in midfield constantly breaking up any midfield threat started to influence the attack with a series of attempted through balls that unsettled the visitors defensive lines.
Substitute Daniel Bussell almost made an immediate impact. Leaving his defender in no mans land with a quick turn of pace Bussell sped on through in goal, with the white of the oppositions goalkeeper in view Bussell could have tried his luck with a shot on goal, instead opting to cut the ball back inside for Roberts who saw his shot agonisingly creep inches past the post. After putting in an incessant effort at full back the experienced defender Mayho was replaced by Steve Daniels who continued with the effort from the previous player. Sutton scored a third on the break and Hampton showed the resilience and character that is now defining the culture of the squad by lifting their heads for one big last effort. The consistently impressive L.Limbrick was replaced buy Steven Atkinson with Stephens moving into defence duties to nullify and threat from the fast paced opposition winger. With midfielder Lacey sin-binned for a few choice comments towards the match official Hampton created one last threat. Roberts sending Bryce through on goal, it looked hopeful that he would see his second goal of the day. A powerfully struck shot saw the goalkeeper push the ball in to path of the on rushing Atkinson who had little time to adjust his feet before seeing the attempt go wide of the post.
Final result FC Hampton 2 v Sutton Bridge United (3)

Man of the match: Kaylum Chater

Managers comments: “After a heavy defeat last week it was important for the players to feel competitive again. The first half of the match I witnessed the finest display from all the players this season. We are all working hard to create a culture together that allows the players to enjoy their football and be competitive.This was a tough match against strong opposition and we proved to ourselves that we can compete with the stronger teams in this division. I could not have asked from anymore from the whole squad today and it’s tinged with frustration that we could not take points from this game. I thank all the players for the continued commitment and attitude. I have not doubt that their effort with be reflected in positive results as the season continues.”